September 9, 2021 – Vancouver, Canada – First Mining Gold Corp. (“First Mining” or the “Company”) (TSX: FF) (OTCQX: FFMGF) (FRANKFURT: FMG) is pleased to announce that the Company has entered into an earn-in agreement with ALX Resources Corp. (“ALX”) pursuant to which First Mining, through its wholly-owned subsidiary Gold Canyon Resources Inc. (“Gold Canyon”), may earn, over the course of two stages and over a period of five years, up to a 100% interest in ALX’s Vixen North, Vixen South and Vixen West properties (the “Vixen Properties”) located near First Mining’s Springpole Gold Project in northwestern Ontario.  The Vixen Properties are comprised of 521 single cell mining claims covering approximately 10,600 hectares.

In addition to entering into the earn-in agreement with ALX to earn into the Vixen Properties, First Mining has acquired additional claims covering approximately 6,000 hectares within the Birch-Uchi Greenstone Belt (“New Claims”), including the acquisition of the past-producing, high-grade Sol d’Or mine located adjacent to the Swain Lake Property, on which First Mining has a three-year option agreement with Whitefish Exploration Inc.  With the addition of the Vixen Properties and the New Claims, First Mining now controls over 66,000 hectares in the Birch-Uchi Greenstone Belt and is the largest single claim holder in the region.

“First Mining’s recent land tenure consolidation in the Birch-Uchi Greenstone Belt is another major development for our Company and the region,” stated Dan Wilton, CEO of First Mining. “Since the beginning of the year, First Mining has significantly increased its land package around Springpole and believe the Birch-Uchi is the one of the most under-explored and highly prospective gold belts in Canada, with district-scale potential.  The region hosts several past-producing mines including our newly acquired Sol d’Or mine where there has been demonstrated historical, high-grade exploration potential.  First Mining intends to undertake a comprehensive regional exploration program over the next twelve months for the first time since our acquisition of Springpole in 2015 and will be incorporating these newly acquired and optioned claims into the program.  First Mining remains focused on advancing and permitting our flagship Springpole Gold Project which hosts the largest known gold deposit in the district and will be a critical strategic asset if more gold resources are found in the region.” 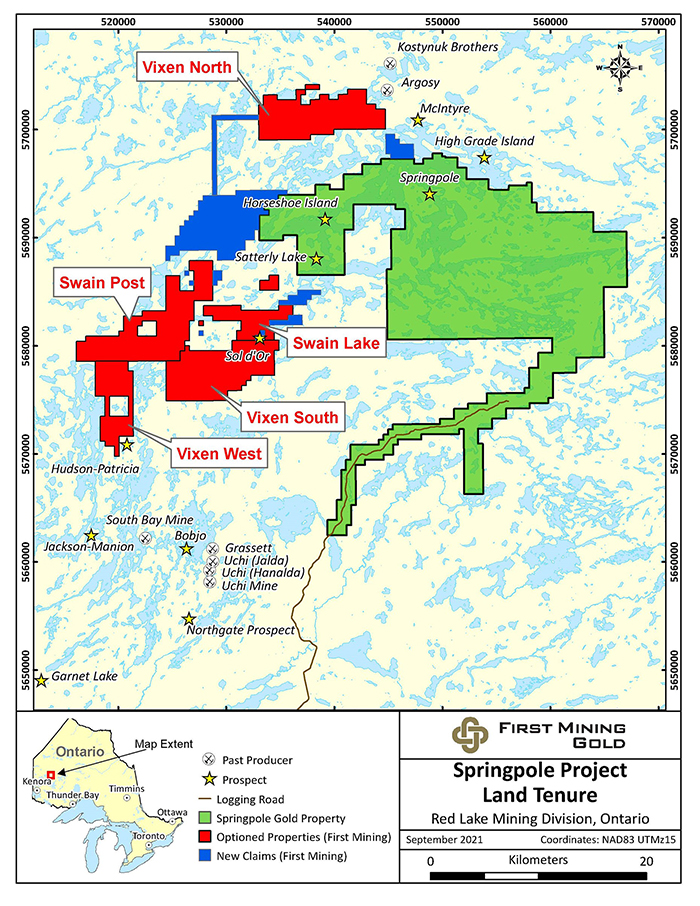 The Birch-Uchi Greenstone Belt is one of several greenstone belts in the Uchi Subprovince of the Western Superior Province of the Canadian Shield.  From west to east these are the Rice Lake greenstone belt in Manitoba, and the Red Lake, Birch-Uchi, Meen-Dempster, Pickle Lake, Lake St. Joseph and Miminiska-Fort Hope greenstone belts in Ontario. Gold exploration in the Birch-Uchi greenstone belt started after the discovery of Red Lake in 1925 and was followed by a peak of activities in the late 1920s and 1930s.  Gold deposits were discovered and put into production including the Uchi, Bobjo, Bathurst, Argosy, Jackson-Manion, Hudson-Patricia, McIntyre, Sol d’Or and Kostynuk Brothers gold mines.  Historical gold production in the Birch-Uchi is estimated at approximately 250,000 ounces (“oz”), with the last documented production in the 1960s.  Since the 1960s, exploration in the Birch-Uchi focused on both base metals and precious metals, which led to the development of the South Bay Mine that produced copper, zinc and silver between 1971 and 1981, and there has been increased attention on gold exploration in the area since the 1980s.  To date, Springpole is the only gold deposit in the belt with defined Mineral Reserves and Mineral Resources under National Instrument 43-101 Standards of Disclosure for Mineral Projects (“NI 43-101”).

The Vixen Properties consist of three separate claim groups: Vixen North, Vixen South and Vixen West (Figure 1). Historical surface exploration work on the Vixen Properties has been carried out by the Ontario Geological Survey and the Province of Ontario. Recent exploration by ALX in 2019 and 2020 included a prospecting and sampling program focused on two areas at Vixen North: the Vulpin Zone and the Dickenson Zone.  Rock samples collected from outcrop and historical trenches at the Dickenson Zone ranged up to 17.7 g/t gold (“Au”) and were within a swarm of quartz veins that were traced for over 60 metres at surface.  Samples collected by ALX at the Vulpin Zone ranged up to 8.41 g/t Au.  In 2020, a high-resolution, helicopter-borne magnetic and VLF-EM survey totalling 476 line-kilometres was also completed to better define a known 3,000 metre-long high magnetic trend and other important structural trends present at Vixen North.

The Sol d’Or site is located in the Honeywell Township on the north shore of the southwest arm of Grace Lake and was originally staked in 1927.  From 1933 to 1936, the mine produced 258 oz Au and 33 oz silver from 458 tonnes of ore, with a reported average grade of 0.563 opt (17.5 g/t Au). Since the 1960s, further exploration work has been carried out on and around the mine site, including geophysical surveys, mapping, drilling, and sampling programs.  More recent exploration programs from 2001 to 2012 by Fronteer Development Group, Red Lake Resources, Big Bear Mining Corp., and eShippers Management Ltd. have been successful in confirming historical anomalous results and identifying areas of new mineralization.  In 2004, Fronteer Development drilled three holes for a total of 372 metres into the No. 3 Vein, demonstrating gold grades of up to 5.45 g/t Au.  In 2012, prospecting by eShippers Management Ltd. returned 7.5 g/t Au from the Sol d’Or mine dump grab samples and 10.4 g/t Au from the No. 7 Vein.

Hazel Mullin, P.Geo., Director, Data Management and Technical Services of First Mining, is a “Qualified Person” for the purposes of NI 43-101, and she has reviewed and approved the scientific and technical disclosure contained in this news release.

First Mining is a Canadian gold developer focused on the development and permitting of the Springpole Gold Project in northwestern Ontario. Springpole is one of the largest undeveloped gold projects in Canada. The results of a positive Pre-Feasibility Study for the Springpole Gold Project were announced by First Mining in January 2021, and permitting activities are on-going with submission of an Environmental Impact Statement (“EIS”) for the project targeted for 2021. The Company also holds a large equity position in Treasury Metals Inc. who are advancing the Goliath Gold Complex toward construction. First Mining’s portfolio of gold projects in eastern Canada also includes the Pickle Crow (being advanced in partnership with Auteco Minerals Ltd.), Hope Brook (being advanced in partnership with Big Ridge Gold Corp.), Cameron, Duparquet, Duquesne, and Pitt gold projects.

Forward-looking statements in this news release relate to future events or future performance and reflect current estimates, predictions, expectations or beliefs regarding future events and include, but are not limited to, statements with respect to: (i) the timing of any further news releases from the Company in respect of regional drilling plans for Springpole and the progress of technical and environmental work at Springpole; (ii) the advancement and merits of the Goliath Gold Project; and (iii) the submission of the EIS for the Springpole Gold Project.  All forward-looking statements are based on First Mining's or its consultants' current beliefs as well as various assumptions made by them and information currently available to them. There can be no assurance that such statements will prove to be accurate, and actual results and future events could differ materially from those anticipated in such statements. Forward-looking statements reflect the beliefs, opinions and projections on the date the statements are made and are based upon a number of assumptions and estimates that, while considered reasonable by the respective parties, are inherently subject to significant business, economic, competitive, political and social uncertainties and contingencies. Such factors include, without limitation the Company’s business, operations and financial condition potentially being materially adversely affected by the outbreak of epidemics, pandemics or other health crises, such as COVID-19, and by reactions by government and private actors to such outbreaks; risks to employee health and safety as a result of the outbreak of epidemics, pandemics or other health crises, such as COVID-19, that may result in a slowdown or temporary suspension of operations at some or all of the Company's mineral properties as well as its head office; fluctuations in the spot and forward price of gold, silver, base metals or certain other commodities; fluctuations in the currency markets (such as the Canadian dollar versus the U.S. dollar); changes in national and local government, legislation, taxation, controls, regulations and political or economic developments; risks and hazards associated with the business of mineral exploration, development and mining (including environmental hazards, industrial accidents, unusual or unexpected formations, pressures, cave-ins and flooding); the presence of laws and regulations that may impose restrictions on mining; employee relations; relationships with and claims by local communities, indigenous populations and other stakeholders; availability and increasing costs associated with mining inputs and labour; the speculative nature of mineral exploration and development; title to properties; and the additional risks described in the Company’s Annual Information Form for the year ended December 31, 2020 filed with the Canadian securities regulatory authorities under the Company’s SEDAR profile at www.sedar.com, and in the Company’s Annual Report on Form 40-F filed with the SEC on EDGAR.

First Mining cautions that the foregoing list of factors that may affect future results is not exhaustive. When relying on our forward-looking statements to make decisions with respect to First Mining, investors and others should carefully consider the foregoing factors and other uncertainties and potential events. First Mining does not undertake to update any forward-looking statement, whether written or oral, that may be made from time to time by the Company or on our behalf, except as required by law.