- 27,000 metre infill and expansion drilling campaign at Goldlund expected to commence by end of January 2017

VANCOUVER, BRITISH COLUMBIA--(Marketwired - Jan. 9, 2017) - First Mining Finance Corp. ("First Mining" or the "Company") (TSX VENTURE:FF)(OTCQX:FFMGF)(FRANKFURT:FMG) is pleased to announce the release of an initial Resource estimate for its Goldlund Gold Project ("Goldlund" or the "Project") located near the town of Sioux Lookout in northwestern Ontario. The Company assumed control of the Goldlund project through its amalgamation with Tamaka Gold Corporation ("Tamaka") on June 17, 2016. The Resource estimate was prepared by WSP Canada Inc. ("WSP") of Sudbury, Ontario and has an effective date of September 20, 2016. A technical report for this initial Resource estimate for Goldlund, prepared in accordance with National Instrument 43-101 Standards of Disclosure for Mineral Projects ("NI 43-101"), will be filed by the Company on SEDAR within 45 days of the date of this news release.

Highlights of the Goldlund Deposit

Keith Neumeyer, Chairman of First Mining stated, "In comparing the Goldlund project to the rest of our portfolio, we believe that Goldlund has the potential to become one of our cornerstone projects. We believe that we have the potential to expand the Goldlund resource with additional drilling and the project is also adjacent to existing infrastructure such as a highway and electricity, which make this project highly compelling. Going forward I'm excited to see how the results from our 2017 winter drilling campaign at Goldlund unfold as we seek to further define the resource on this project." 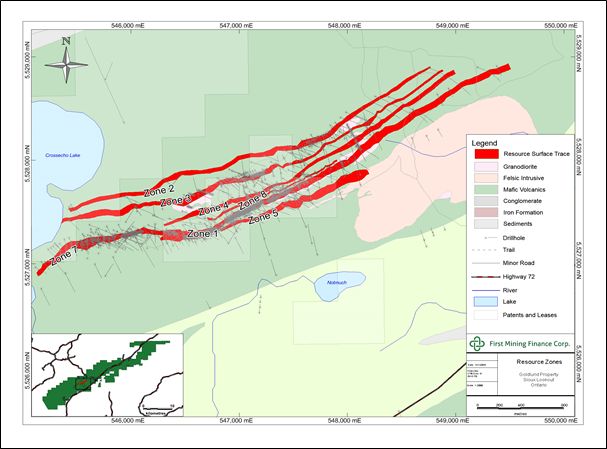 Table 2 below presents a sensitivity analysis of the pit constrained grade-tonnage estimate to increasing cut-off grade:

The Goldlund deposit is situated within a land package of approximately 280 square kilometres (28,000 hectares) referred to as the Goldlund Gold Project (the "Property"). The Property has a strike-length of over 50 kilometres in the Wabigoon Subprovince. Goldlund is an Archean lode-gold project located in northwestern Ontario, approximately 60 kilometres from the township of Dryden. The claims that make up the land package cover the historic Goldlund and Windward mines, which are currently owned by First Mining through its wholly-owned subsidiary, Tamaka. The Goldlund deposit is currently defined by surface and underground diamond drilling, together with underground development.

The Goldlund deposit can be classed as an Archean orogenic or lode gold system, although not the classic type of single or multiple veins of quartz-ankerite-pyrite in greenstone terranes typical of eastern Canada. Gold mineralization at Goldlund, as currently understood, is contained in a stockwork system of 1 to 20 centimetre wide quartz-carbonate-pyrite veinlets hosted by a parallel set of northeast striking, steeply dipping granodiorite and rhyolite porphyry dikes 15 to 60 metres in width in basaltic volcanic rocks. The vein stockworks are restricted to the more brittle granodiorite dikes and rapidly diminish in thickness and frequency outward from the granodiorite-basalt contact. The gold-bearing, stockworked granodiorite dikes vary in thickness from 14 to 60 metres in width, dip 80° to the southeast and can be traced over a 3 kilometre strike length, whereas in the vertical, the dikes have been explored in drillholes to a depth of 400 metres. The dikes themselves occur at outcrop over an 18 kilometre strike length and will be the subject of future exploration in the Goldlund property package.

First Mining compiled all the data used in completing the Mineral Resource from original source drillhole documents and from plan and section originals and copies. Goldlund has been tested by 1,816 historic drillholes and underground shafts, ramps and drifts. However, only drillholes within the areas of interest and with exploration potential were included in the database. In addition to the drillhole database, a dataset containing underground wall sampling intervals was included. Wall sampling was conducted as continuous samples on both walls and at times at chest and back heights. The wall sampling data was converted into drillhole format to supplement the dataset.

Three-dimensional wireframe models of mineralization were developed for the seven zones based on: geology, alteration, a gold cut-off of greater than 0.2 g/t and a minimum 2 metre horizontal width. Areas of drift development in mineralization were also created. Sectional interpretations were digitized in Datamine Studio software, and these interpretations were linked with tag strings and triangulated to build the three-dimensional solids by First Mining. WSP imported the Datamine solid files into Surpac for use.

The mineralized zones are generally contiguous, however, due to several transverse faults throughout the Project, mineralization may often be terminated or shifted along these planes in one or more directions.

The seven zones (Zones 1 through 8, no Zone 6), which are part of the Mineral Resource, were sampled by a total of 60,844 drillhole intervals and 279 wall sample intervals.

Individual block models were established in Surpac for all seven zones using one parent model as the origin.

Drillhole spacing varies with the majority of the drilling tightly spaced from 30 metres. A block size of 10 x 10 x 10 metres was selected in order to accommodate the more closely spaced drilling and the narrow nature of the mineralization.

Sub-celling of the block model on a 1 x 1 x 1 allows the parent block to be split once in each direction to more accurately fill the volume of the wireframes, thus more accurately estimate the tonnes in the resource.

A pit shell was generated using the Lerch-Grossman (LG) algorithm in Whittle. Table 3 is a summary of the parameters used in the pit optimization process. WSP has concluded that the optimized pit shell suggests a resource using a 0.4 g/t cut-off and a US$1,350 gold price with a 5.8 strip ratio would be acceptable.

The Goldlund database has gone through several validations including 10% of the total database extant prior to 2010. The error rate of the initial dataset was found to exceed 1%. The entire dataset was subsequently examined and corrected and a second review returned no errors.

A total of 100% of the assay data received between 2011 and 2014 were checked against the digital assay certificates with no discrepancies found. The same is true of collar coordinates, survey data, and lithology intervals.
The drillhole data database underwent a final validation during loading into Surpac 6.6. Any errors identified in the routine were checked against the original logs and corrected.

From 2011 to 2014 a total of thirty one surface drillhole collars were confirmed by the author using a Garmin hand-held GPS unit having an accepted resolution of ±5 metres. An additional 10 collar locations were verified by a different QP in 2013 using a similar GPS unit.

In 2010 and 2013 a total of thirty five samples of mineralized drill core were collected and delivered by the author to Actlabs and Accurassy in Thunder Bay for preparation and analysis.

The check samples reproduced the grades in the Goldlund drillholes as accurately as would be expected in an Archean lode gold deposit.

Pulps from a further thirty mineralized intervals in the 2013-2014 drill program were collected and delivered by WSP to ALS Minerals in Sudbury, Ontario for analysis for gold using a 50 gram aliquot in a FA/AA finish. In addition a QC test was performed on each sample to test the pulp fineness.

WSP concluded the sampling practices applied at Goldlund meet current industry standards and that the sample database provided is suitable to support the resource estimation.

Dr. Chris Osterman, P.Geo. CEO of First Mining is a qualified person as defined by NI 43-101 and has reviewed and accepts responsibility for the technical information contained within this press release. Mr. Todd McCracken, P.Geo, Manager with WSP Canada Inc., and the author of the Technical Report, is an independent "qualified person" within the meaning of NI 43-101.

Neither Todd McCracken of WSP Canada Inc. nor any associates employed in the preparation of the Technical Report ("Consultants") have any beneficial interest in First Mining. These Consultants are not insiders, associates, or affiliates of First Mining. The results of this Technical Report are not dependent upon any prior agreements concerning the conclusions to be reached, nor are there any undisclosed understandings concerning any future business dealings between First Mining and the Consultants. The Consultants are paid a fee for their work in accordance with normal professional consulting practices.

First Mining is a mineral property holding company whose principal business activity is to acquire high quality mineral assets with a focus in the Americas. The Company currently holds a portfolio of 25 mineral assets in Canada, Mexico and the United States with a focus on gold. Ultimately, the goal is to continue to increase its portfolio of mineral assets through acquisitions that are expected to be comprised of gold, silver, copper, lead, zinc and nickel.

Forward-looking statements are frequently, but not always, identified by words such as "expects", "anticipates", "believes", "intends", "estimates", "potential", "possible", and similar expressions, or statements that events, conditions, or results "will", "may", "could", or "should" occur or be achieved. Forward-looking statements in this news release relate to, among other things: commencement of expansion drilling at the Goldlund project; the potential results of such drilling; any upgrade to, or expansion of, the resources on the Goldlund project; and the exploration potential and upside of the Goldlund project. Actual future results may differ materially. There can be no assurance that such statements will prove to be accurate, and actual results and future events could differ materially from those anticipated in such statements. Forward-looking statements reflect the beliefs, opinions and projections on the date the statements are made and are based upon a number of assumptions and estimates that, while considered reasonable by the respective parties, are inherently subject to significant business, economic, competitive, political and social uncertainties and contingencies. Many factors, both known and unknown, could cause actual results, performance or achievements to be materially different from the results, performance or achievements that are or may be expressed or implied by such forward-looking statements and the parties have made assumptions and estimates based on or related to many of these factors. Such factors include, without limitation, management's discretion to refocus its exploration efforts; fluctuations in the spot and forward price of gold, silver, base metals or certain other commodities; fluctuations in the currency markets (such as the Canadian dollar versus the U.S. dollar); changes in national and local government, legislation, taxation, controls, regulations and political or economic developments; risks and hazards associated with the business of mineral exploration, development and mining (including environmental hazards, industrial accidents, unusual or unexpected formations, pressures, cave-ins and flooding); the presence of laws and regulations that may impose restrictions on mining; employee relations; relationships with and claims by local communities and indigenous populations; availability and increasing costs associated with mining inputs and labour; the speculative nature of mineral exploration and development; and title to properties. Readers should not place undue reliance on the forward-looking statements and information contained in this news release concerning these times. Except as required by law, First Mining does not assume any obligation to update the forward-looking statements of beliefs, opinions, projections, or other factors, should they change, except as required by law.